You don’t need expensive equipment for VoLTE/VoWiFi research! Learn how VoLTE/VoWiFi works by setting up your own Wi-Fi calling server with free software.

There’s no practical use for this (you can’t connect your private phone network to the real phone network, so you can only call yourself), but it’s fun! 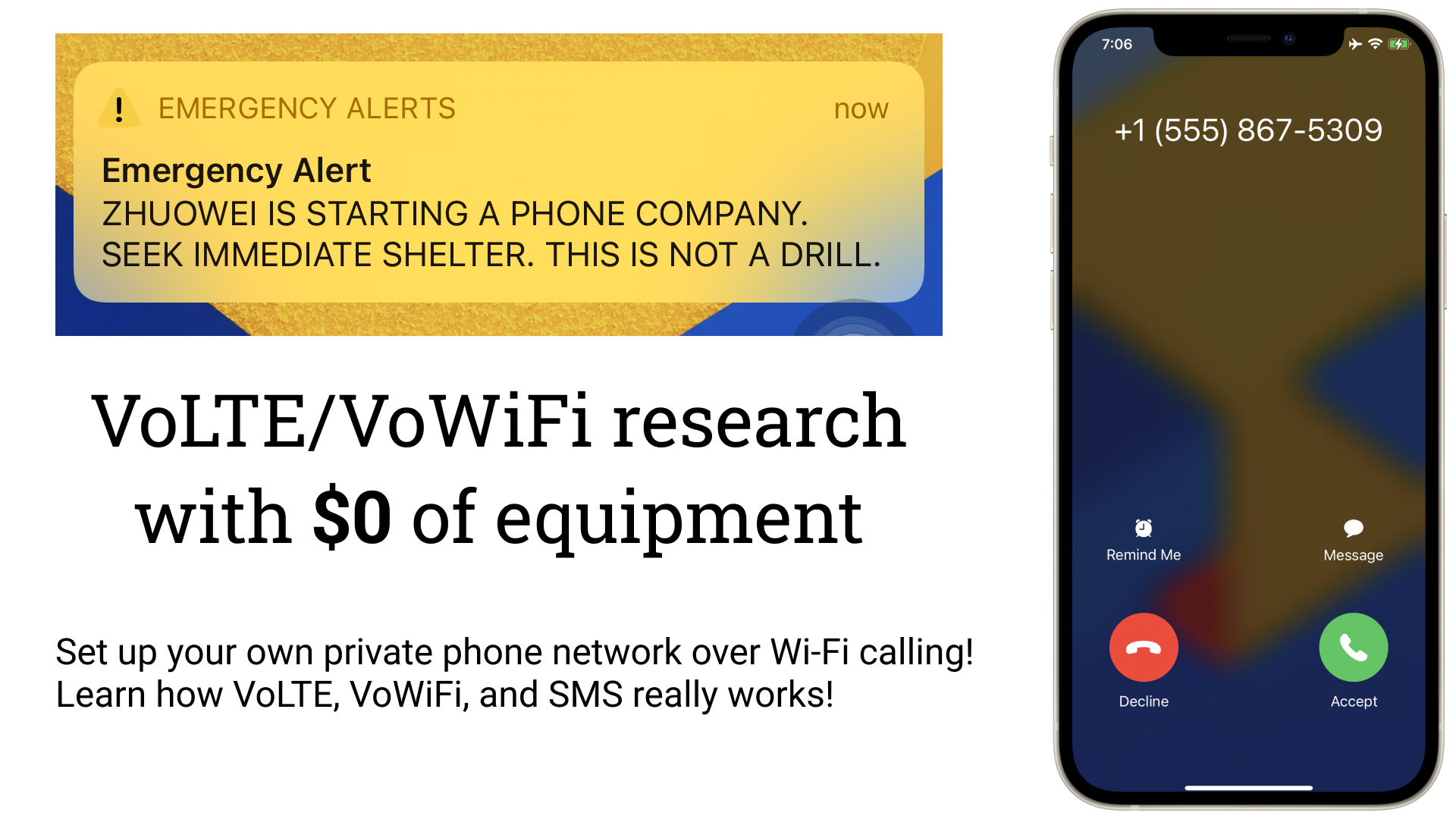 This is the second post in a series of VoWifi/VoLTE posts. The first is here.

I’m setting up my own private phone network, and you can too!

This isn’t just an ordinary Discord channel or private VoIP PBX. I’ll show you how to take over the Wi-Fi calling on a jailbroken iPhone to integrate into the native phone dialer and SMS app, just like a real carrier.

My end goal is to issue my own SIM cards that connects any phone, jailbroken or unjailbroken, to my phone network over Wi-Fi.

Useless? Maybe: you can only dial other people on the private phone network. It’d be like an IRC server, but over text messages and phone calls. But if you want to try it, email me!

VoLTE and Wi-Fi calling are based on open standards like IPsec/IKEv2 and SIP, so our phone network will be built out of free software:

To understand VoLTE and VoWiFi, start by capturing the traffic from your phone when you make a phone call or send an SMS.

All you need is an iPhone and a Mac with Xcode and Wireshark.

Xcode provides the rvictl tool to capture all network traffic from an iPhone, no jailbreak required.

Edit: If you don’t have a Mac, gh2o’s rvi_capture can capture on Linux and Windows. (Thanks, Adam, for letting me know!)

All SIP messages between the phone and carrier are visible, fully unencrypted. You can see what happens when you call another phone:

Or how you receive a text message:

On VoWiFi, you can even dump the actual voice codec packets.

In addition, the iPhone also offers logs from the VoWiFi ePDG VPN tunnel and SMS processing:

Open the Console app on a Mac, filter to CommCenter, then enable “Action -> Include Info Messages / Include Debug Messages”.

Then, filter for CommCenter for VoLTE/VoWiFi messages, such as this IKEv2 handshake: Our own phone network

What if you don’t want to just look at the VoLTE/VoWiFi packets? What if you want to build your own network?

To do that, you need a jailbroken iPhone and a Docker container.

If you’re on Android, devices launched with Android 10 and above (all devices built in 2020 or later) can likely redirect Wi-Fi calling without root, but I haven’t tried it yet.

We’re targeting VoWiFi (Wi-Fi calling) since running a VoLTE network requires at least a $150 radio and approval for broadcasting on LTE frequncies. You don’t need any special hardware or red tape for Wi-Fi.

Wi-Fi calling is protected using an IPsec/IKEv2 VPN tunnel, and authenticated using EAP-AKA, which uses a secret key on the SIM card that only the carrier knows. (See my previous post for details)

Since I don’t have blank SIM cards, I wrote a jailbreak tweak to replace the SIM card check with a simple pre-shared key (password) authentication.

To run the tweak, you’ll need to:

End result: VoWifi tunnel creates a VPN to your IPsec/IKEv2 VPN server instead of Verizon’s.

How I built the tweak

iPhones run the entire VoLTE/VoWiFi stack in userspace: with a jailbreak, we can do anything. However, my end goal is to make this work with a custom SIM card on an unjailbroken phone, so I only did the minimum amount of changes.

This was my first iPhone tweak, so thanks to everyone who helped me:

and thanks to the resources I consulted:

A phone talks to two services to set up VoWifi:

I made a Docker container with both preinstalled.

First, if you’re not on Verizon, change the IMS domain in the config. You can find the domain by capturing the SIP REGISTER request with rvictl.

Wait for the connection from the phone:

Then try sending the phone a text message:

Or an emergency alert:

Or even try to replicate the VoLTE/VoWiFi attacks from Purdue’s researchers on your own network.

A deeper dive into the container

Sending a text message to the phone

Receiving a text message from the phone

Not quite ready yet. But email me!

Here’s why you shouldn’t join me yet:

Instead, set up your own network and play around it yourself!

I’m fixing some of these issues:

If you’re interested in joining after I fix these issues, email me at

and let me know:

If you have any questions, please reach out over email or Twitter!